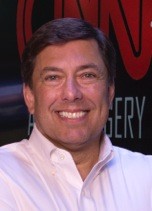 Based in Atlanta, he has worked extensively with both the Editorial and Technical leadership in developing and executing CNN’s broadcast coverage of virtually every significant domestic news story of the last 15 years.

Greg has led CNN’s domestic UAS program since CNN initiated its research efforts in 2013. Because of his demonstrated leadership in the field, he was named to the federal Drone Advisory Committee (DAC) and also sits on the FAA’s Unmanned Aircraft Safety Team (UAST). He is a member of the Association for Unmanned Vehicle Systems International (AUVSI), ASTM and serves on the Advisory Board of ASSURE (Alliance for System Safety of UAS through Research Excellence).

Before becoming Director of News Technology, Greg was Director of Planning, focused specifically on editorial content. Greg began his career as a Production Assistant at ESPN and joined CNN in 1984. He earned his bachelor’s degree in Mass Communications from Purdue University.