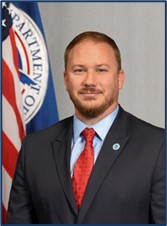 Career: Brent is an expert in the field of Homeland Security, with specialized experience in transportation security, red teaming, and countering uncrewed aircraft systems (UAS). Brent has served in number of homeland security focused leadership positions including his current role as the Director for Counter-Uncrewed Aircraft Systems (C-UAS) at the Department of Homeland Security Office of Strategy, Policy, and Plans, under the Counterterrorism and Threat Prevention -Law Enforcement umbrella.  Brent is responsible for the Department’s C-UAS policy, and implementation of the C-UAS authorities granted to DHS in the Preventing Emerging Threats Act of 2018.

Background: Mr. Cotton’s security career began during the Transportation Security Administration (TSA) rollout in 2002, when he began training the first federalized screeners and played an active role in developing and implementing checked baggage screening policy and protocols. After arriving at TSA headquarters in 2010, he joined the Operations Improvement Branch (OIB) where he created and refined procedures associated with rolling out new types of equipment. Identified as an unconventional thinker willing to challenge assumptions, Brent was recruited as a member of the Administrator’s Risk Based Security Team where he developed new and innovative approaches to transportation security. In this role Brent helped create and implement the TSA Precheck program which now has more than 10M voluntarily enrolled members.

Education: Brent holds a bachelor’s degree from the University of West Florida College of Business, as well as a master’s degree in Security Studies from the Naval Post Graduate School.

Personal: Brent is married with one son, and lives in northern Virginia. Brent is an avid golfer, fisherman, and motorcyclist, as well as a Reserve Police Officer for the Metropolitan Police Department, proudly serving the 3rd District.