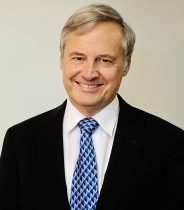 Phil is Director of Corporate Analysis at Teal Group. He has provided strategic and market analysis for clients in commercial aerospace and defense, including major U.S. and European prime contractors, since joining Teal fifteen years ago.

He also writes and edits Teal's Defense and Aerospace Companies Briefing, which analyzes the performance, outlook and strategies of 50 aerospace and defense companies in the United States, Europe, Asia and South America. He is a co-author of the annual World Unmanned Aerial Vehicle Systems with responsibility for UAV companies.

Phil writes and comments publicly about defense and aerospace companies. He has a monthly industry column in Homeland Security Today. Frequently cited as an expert on defense and aerospace companies and UAVs, his comments have appeared in the New York Times, the Washington Post, the International Herald Tribune, Forbes, Fortune, Flight International, Defense News and numerous other publications. He has also appeared on CNBC and NBC Nightly News.

Before he joined the Teal Group, Phil covered business trends and international security issues for Defense News, a leading publication covering the worldwide defense industry. In the course of 11 years reporting on the defense industry, he reported from more than 40 countries in Asia, the Middle East, Latin America and Europe. Earlier he worked for a year covering Central America as a special correspondent for U.S. News and World Report based in El Salvador and for two years as a special correspondent for Time Magazine based in Cairo, Egypt covering the Middle East.

All presentations by Philip Finnegan