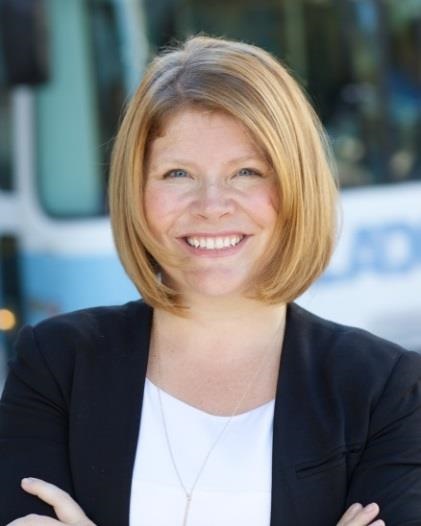 Seleta Reynolds is General Manager of the Los Angeles Department of Transportation (LADOT) appointed by the Administration of Mayor Eric Garcetti.  She leads a multi-faceted organization with an annual budget of $650 million.  LADOT’s 2,000 employees are responsible for managing over 7,500 miles of streets, 37,000 parking meters, and the most advanced traffic signal system in the country, with over 46,000 traffic lights.  LADOT transit carries 24 million rides annually.  The agency is responsible for implementation of $250 million grant-funded projects, directing traffic for over 2,000 special events, and overseeing taxi and medical transport franchises.  Ms. Reynolds is responsible for implementing Great Streets for Los Angeles, a plan to reduce traffic deaths, double the number of people riding bikes, and expand access to transportation choices for Angelenos and the region.
Ms. Reynolds has overseen the buildout of over 33,600 square feet of plazas and parklets, the launch of Los Angeles’ Vision Zero initiative, and implementation of the first department-wide employee performance coaching initiative.  She is most proud of the construction of Los Angeles’ first parking-protected bikeway; hosting the city’s first artist-in-residence in a city department; and launching the city’s Transportation Technology Strategy to prepare for connected and autonomous vehicles.
Ms. Reynolds has over 20 years of transportation experience throughout the United States. Prior to accepting her current position, Ms. Reynolds served as a manager in the Livable Streets sub-division at the San Francisco Municipal Transportation Agency, where she worked on the city’s Vision Zero capital plan and oversaw the launch of Bay Area Bikeshare.  She spent ten years as an Associate with Fehr & Peers consulting firm, where she managed the firm’s San Francisco and Seattle offices as well as the companywide bicycle and pedestrian discipline.  She began her career as the Bicycle and Pedestrian Coordinator for the City of Oakland where she launched the city’s first bike parking program, Bicycle and Pedestrian Master Plan, and oversaw the installation of the first sharrows in California.
She has advised transportation technology companies like WalkScore, contributed to the state-of-the-practice as an Association of Pedestrian and Bicycle Professionals Board Member, mentored young professionals through Women’s Transportation Seminar, and nurtured research on Transportation Research Board committees.  Ms. Reynolds serves as the President of the National Association for City Transportation Officials.   She graduated from Brown University with a degree in American History.

All presentations by Seleta Reynolds