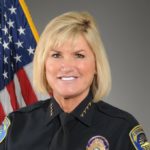 Chief Kennedy has established a reputation for an outstanding work ethic, professionalism, commitment to the community, and dedication to compassionate policing. Her passion for police work and providing the highest quality of service to the community quickly propelled her through the ranks to become Chula Vista’s first female Police Lieutenant and then in 2013, Police Captain.

Chief Kennedy is committed to implementing the six pillars of 21st Century Policing by providing the highest level of professional law enforcement services to the Chula Vista community. This is achieved by building trust and legitimacy, creating policies that reflect the community values and oversight to ensure the community has a voice, increasing the use of technology, implementing community policing strategies, expanding officer training and education, and enhancing officer safety and wellness.

Under Chief Kennedy’s leadership, the Chula Vista Police Department (CVPD) has adopted an innovation initiative focused on using technology to enhance community safety, increase situational awareness and officer safety, and reduce response times. CVPD is proud to be the first and only police department to work under the Federal Aviation Administration’s UAS Integrated Pilot Program “Drone as a First Responder (DFR)” concept which provides real-time data to officers and supervisors allowing officers to make better tactical decisions in the field providing safer outcomes for all parties involved. Chief Kennedy’s goal is sharing CVPD’s story with law enforcement partners nationally and internationally to help standardize and expand to any agency interested in the benefits. CVPD is also leading another pilot project called Live911. Live911 allows the officers in the field to hear incoming 911 calls and respond before critical calls are processed and dispatched.

Chief Kennedy has a bachelor’s degree in Business Management from California Coast University. She is a graduate of the FBI National Academy, Class #243 and served on the FBI National Academy California Chapter Board of Directors for six years. She is a founding member of the San Diego Chapter of Woman Leaders in Law Enforcement Foundation and served as President of the Chapter for 3 years. Chief Kennedy is currently the President of the San Diego County Chiefs’ and Sheriff’s Association and is on the Board of Directors for Girls Scouts San Diego and Promise 2Kids Foundation. Yet, what is most important to her, is spending time with her family and friends, and volunteering with non-profit organizations. Chief Kennedy serves as the President of Project Compassion and leads medical mission teams throughout the world helping those in need. She has traveled and lead teams on more than 20 international trips to Uganda, Kenya, Cameroon, Mozambique, Malawi, Kenya, Madagascar, Mexico, Ecuador, and Ethiopia. Helping others is her passion and motivation.